Demonstrators set a riot police vehicle on fire during clashes on the commemoration of the first anniversary of the social uprising in Chile, in Santiago, on October 18, 2020, as the country prepares for a landmark referendum. – Changing the constitution enacted under former dictator Augusto Pinochet, who ruled from 1973-90, was a key demand of protesters during the two months of violent civil unrest against the government and inequality. Chileans will be asked two questions on October 25: do they want a new constitution and who should draft it. (Photo by Martin BERNETTI / AFP) 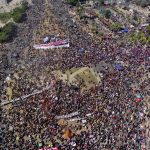 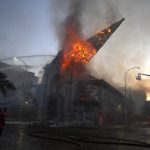